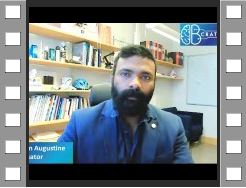 In this short interview, we speak with Dr Robin Augustine, B-CRATOS project Coordinator, about the first year of the project, and address the following questions: 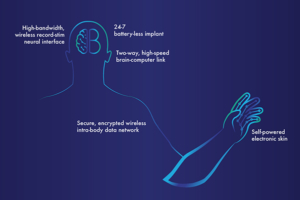 A primary technological goal for B-CRATOS is to further develop, integrate, and demonstrate these technologies in a new BCI platform through benchside and in vivo tests.

In the realm of healthcare applications, B-CRATOS aims to develop this new BCI platform to serve as an “always-on” (i.e. continuous 24/7 operation without medical supervision) wireless implant for recording and stimulation/neuromodulation of neurons anywhere in the central or peripheral nervous system, to enable learning and brain plasticity necessary for complete integration of biophysical sensors and prosthetics. The secure, encrypted intra-body data network offered by B-CRATOS could enable and advance many future medical applications, such as brain-organ communication, intra-body sensor network, wearable exoskeletons, and improved bionic arm control.

Beyond healthcare, the two-way high-speed brain-computer link being developed in B-CRATOS may also facilitate real-time sensing and stimulation for augmented reality, learning and even gaming applications. The self-powered mechano-electric transduction-based tactile sensing utilized in B-CRATOS enables large-area, self-powered electronic skin with high spatial resolution, which could be used anywhere from treating burn injuries to augmented reality. The B-CRATOS consortium expects that these technologies will have profound positive impact in the Neural Disease treatment, Electroceutical, AI, Exoskeleton and Robotics sectors.

Discover How B-CRATOS will work 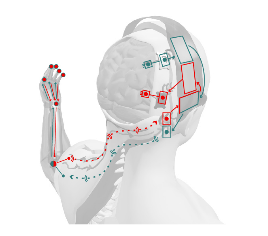 B-CRATOS is Building a New Kind of *Wireless* Brain Computer Interface: WHY?

The B-CRATOS project aims to build a new wireless BCI system that both translates high-bandwidth brain activity into control signals to control a prosthetic limb and simultaneously converts tactile information detected by electronic skin into electrical cortical stimulation to restore the sense of touch. In other words, the consortium is designing a more natural and capable prosthetic system. At the core of this effort is the design and integration of novel wireless power transfer and data transmission technologies developed by specialists at NTNU and Uppsala University, as we have previously highlighted.

But upon hearing this, one might respond, “But aren’t there already medical devices using either implanted wires, batteries, or existing wireless technologies? What is novel here?”

Indeed, there are many implantable systems that use wires and batteries (and some have already gone wireless!). This includes pacemakers, deep brain stimulators (DBS) and other implantable pulse generators, glucose monitors and other sensors, and cochlear implants, to name a few. These systems can deliver electrical stimulation to in-body targets, such as the heart or brain, or monitor physiologic signals, such as brain activity or blood glucose levels. The most common cortical neural implants, the pacemaker-inspired DBS devices, have long used subcutaneous wires to link chest-implanted battery-containing pulse generators to implanted electrodes. It might appear that current capabilities overlap with the envisioned B-CRATOS record and stimulation neural interface, and a modern BCI could already be within grasp.

So, why do we need B-CRATOS to innovate wireless technologies?

While existing implantable systems have successfully connected indwelling devices to external hardware through the skin in many cases (drug pumps, early BCI systems), the argument for retiring dependence on transcutaneous connectors is  straightforward. Any compromise of skin barrier integrity potentially increases the risk of infection, future surgical revision, and requires increased care and monitoring, which poses a major challenge for everyday use. And infection is a major concern: a meta-analysis of hardware complications in any DBS system found infection accounted for the greatest risk of reported adverse events, even including fully implantable systems. And although wires fully implanted within the body may not compromise the skin surface by design, the presence of additional “foreign body” hardware increases risks and surgical complexity, and thus the probability of infection. Furthermore, other wire-related complications such as scar tissue adhesions (sometimes referred to as “tethering” or “bow-stringing”) and wire breakage also necessitate surgical revision and repairs, again, increasing patient risk. By transmitting data through tissue, not wires, B-CRATOS seeks to pioneer a novel solution for these challenges.

There exists a growing category of implantable systems leveraging wireless technologies, such as the Responsive Neural Stimulator System (RNS) by NeuroPace and cochlear implants by Med-El, Cochlear, Advanced Bionics, and others. The battery-powered RNS uses a wireless link to enable device programming and even occasional data downloads: the RNS-320 stores about one hour of intracranial EEG data on a small number of channels. Modern cochlear implant systems wirelessly transmit stimulation commands from an external wearable to an implantable stimulator and have discarded bulky batteries in favor of wireless power transfer.

But for a BCI system with the aim of decoding brain activity into complex control like B-CRATOS, these existing wireless technologies are insufficient. For example, the best long-term BCI decoding systems typically utilize large numbers (hundreds) of neural data channels collected at high sample rates (tens of kilosamples per second) and high bandwidth, for (near) real-time processing and decoding. This is in stark contrast to the low channel counts and sample rates of the RNS and other devices: existing wireless implantables do not have these ambitious requirements for data and power. And the Big Data approach in BCI decode algorithms is reflected in the accelerated drive towards new technologies seeking to boost recording channel count and data rates, by such efforts as Neuropixels at UCL, Blackrock Neurotech, NeuroNexus, Neuralink, among others.

Transferring data at the needed scale and speeds for a modern BCI prosthetic will require breakthrough wireless solutions for safe, effective, everyday use. And alongside wireless data transfer, there will be a need for innovations in power reduction, size optimization, and long-term biocompatibility. In the coming years, B-CRATOS will build and demonstrate a system testing the boundaries of what is possible with wireless technologies and deliver an untethered bidirectional BCI platform to enable more advanced decoding and complex closed-loop applications, beyond the current state-of-the-art. 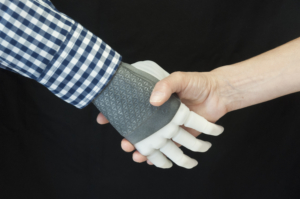 Three reasons for a touching neuroprosthesis

A limb neuroprosthesis is a promising solution for restoring the mobility and independence of people with cervical spinal cord injuries. In the laboratory setting, impressive technological progress has enabled precise neural control of external devices. However, missing from traditional neuroprostheses are the sense of touch and the “sixth sense” of proprioception (the sense of the posture, movement, and muscular exertion of the body). Lately, research has sought to restore these lost senses via electrical stimulation of the brain. While advances on this front are inspiring, there remain substantial challenges to overcome.

For years, research into touch and proprioception have shown that these senses are critical for fluid motor control. Anyone who has undergone a dental procedure can probably relate: Just try to talk with a mouth full of lidocaine without slurring your words. Recent research finds a similar phenomenon at play in brain-computer interfaces (or BCIs for short), with BCI control of a robotic limb improving substantially when electrical signals are sent  to the cerebral cortex to simulate touch and proprioception. B-CRATOS is developing fully biocompatible and implantable neural interfaces as part of its BCI platform which enable such “closed-loop” control of a neuroprosthesis via stimulation of sensory cortices.

The sense of touch is simply something people enjoy. Between the feelings of a good massage, a fine silk, and being touched by a loved one, there is a rich variety of experiences that we take for granted in daily life. The neural mechanisms of the sense of touch are highly sophisticated to match, and BCI researchers are beginning to scratch the surface of what is possible with artificial touch. While electrical stimulation of the cerebral cortex allows one to accurately localize where they are touched and discern the force or intensity of that touch, continued research efforts are underway to provide the full complexity of tactile and proprioceptive experience to those who have lost it.

One element that endows touch with its characteristic richness and complexity is the skin itself. B-CRATOS therefore aims to develop and incorporate a novel, biomimetic, and low-power electronic skin to simulate rich, realistic, and intuitive touch from the moment a neuroprosthesis comes into contact with an object.

Reason 3: Touch is tied to the sense of prosthesis embodiment

Embodiment is the feeling that, rather than merely being a useful tool, a limb or prosthesis is an extension of one’s own body. However, research on existing prostheses which are not touch-enabled shows that they are currently thought of as useful tools: The brains of expert prosthesis users actually separate, rather than unify, representations of prostheses from those of the body. Evidence suggests that the sense of touch is closely tied to the perceived embodiment of a limb or even a convincing limb-like dummy, and may thus be critical for devices under neural control to become embodied in the eyes of the user.

Touch-enabled embodiment of a prosthesis is associated with other positive outcomes. As an example, consider the case of neuropathic pain, a relatively common side-effect of spinal cord injury where people experience pain in limbs whose typical communication with the brain has been disrupted. This is thought to be related to the notorious phantom limb pains experienced by many amputees, and evidence suggests that simulated touch feedback from prostheses or virtual limbs helps to mitigate such phantom pains.

Prosthesis embodiment ultimately arises from a whole suite of efforts to integrate the device with the body. In addition to being touch-enabled, the B-CRATOS integrated BCI platform aims for embodiment through intra-body communication technology which ditches the wires and tethers to promote integration of the neuroprosthesis with the body.

At the moment, limb neuroprostheses are unwieldy devices suited mainly for laboratory or hospital settings. The B-CRATOS integrated BCI platform intends to transform them into devices suited for daily use.  The sense of touch is an essential facet of any effort in this direction. That’s why a critical facet of the B-CRATOS BCI platform is a touching neuroprosthesis that restores sensory feedback. 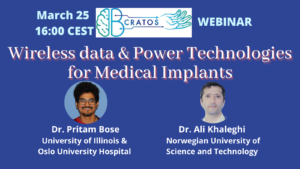