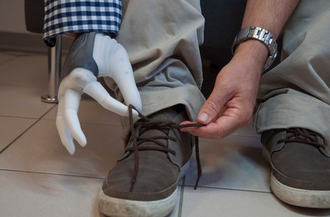 As part of the four-year B-CRATOS “Wireless Brain-Connect inteRfAce TO machineS” project, researchers will be developing wireless body area networks (WBANs) with the aim of connecting the nervous system with signalling systems to stimulate various functions, primarily in prostheses. However, in the long-term, the goal will be to do the same even in muscles and internal organs. This will be achieved through the use of chip implants in parts of the body that need to communicate.

B-CRATOS has a budget of approximately EUR 4.5 million and brings together seven partners from higher education institutions, businesses and institutes across Europe.

Among the participants is an Italian research team based in Pisa that specializes in robotic arms that can be controlled using brain signals. These brain signals will be captured by electronic chips that will be manufactured by a project business partner. Another partner will use AI and high-performance data computing facilities to map neural patterns in combination with motor control. A fourth partner will make modules that can wirelessly transport data and power to implanted devices in the brain. Uppsala researchers have developed a technology that involves enclosing the microwave signals in the slender space between the skin and the muscle layer. This natural fat layer encapsulates the signals while simultaneously allowing them to propagate. Thus, the device is able to transmit at frequencies as high as 5.8 gigahertz over distances of around a meter. Finally, a German partner will validate this new technology in tests with non-human primates.

Robin Augustine, B-CRATOS coordinator, said “In the past, we worked with surgically implanted medical devices connected to the Internet. However, the idea is that these systems will communicate without involving an external computer. For example, the prosthesis can function as a spoon that you are conscious of using. But you never feel like it is part of your body, because it is not cognitively integrated into the brain’s processing system. Instead, we want to create a direct connection between a person’s artificial arm, leg or other body part and their brain so that it can sense its presence and experience control over this body part. This requires an implant in the brain.”

This project has received funding from the European Union’s Horizon 2020 research and innovation programme under Grant Agreement No. 965044.

About the B-CRATOS Partners
Scroll to top